If you’re looking for a way to spice up your Shadowrun, Sixth World game, we’ve got great news for you! A new campaign book called Assassin’s Night is now available for print and PDF purchase (Catalyst shop, DriveThru). Like its predecessor, 30 Nights, this book has several short adventures that can be combined into a longer campaign. The book brings players to Sixth World Barcelona, with beautiful architecture, lovely ocean views, and a burgeoning plot that could shake the entire Sixth World.

We don’t want to give away spoilers, so even the back-cover text is on the lean side, because there are mysteries awaiting that shouldn’t be revealed! Here it is: 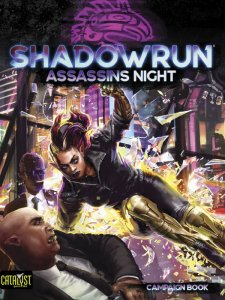 Those words set a plan in motion, but what plan? Something’s about to go down in Barcelona. Someone is marked for death. But who’s the target, and who’s pulling trigger?

Assassins Night is a campaign for Shadowrun, Sixth World where players can dive in and get involved in intrigue, action, and a plot that will shake the world.

And this is just the start of a rush of releases coming as fall approaches! Upcoming releases include a rigger book called Double Clutch, an accompanying deck of vehicle cards (the Rides Deck), and Shadow Points, a deck of location cards tiring illustrations, security details, plot hooks, and more. Look for more information once those are ready to go on sale!