By Robert Volbrecht and Michael Messmer

Revising the Matrix was a top priority for us, with the central goal of making it more intuitive as well as more fun to play. That means we took a machete to the old system cut down of the things that we felt slowed it down too much. That means no more marks, master-slave relationships, and grids (though they still exist thematically, there is no need to differentiate them mechanically). We also wanted to introduce some more flexibility and modular upgrading while also lowering the investment requirements. Hacking the Matrix is now just “Get access, do your thing.”

One of the biggest historical challenges with the Matrix was how it was always it’s own self-contained mini-game. Stop if this sounds familiar: The decker needs to access a system to get a piece of information or control a device. These things happen at a different rate than the rest of the game, so no one else can do anything during this time. Time for the rest of the group to go play video games or pick up a pizza until the decker and GM are done. 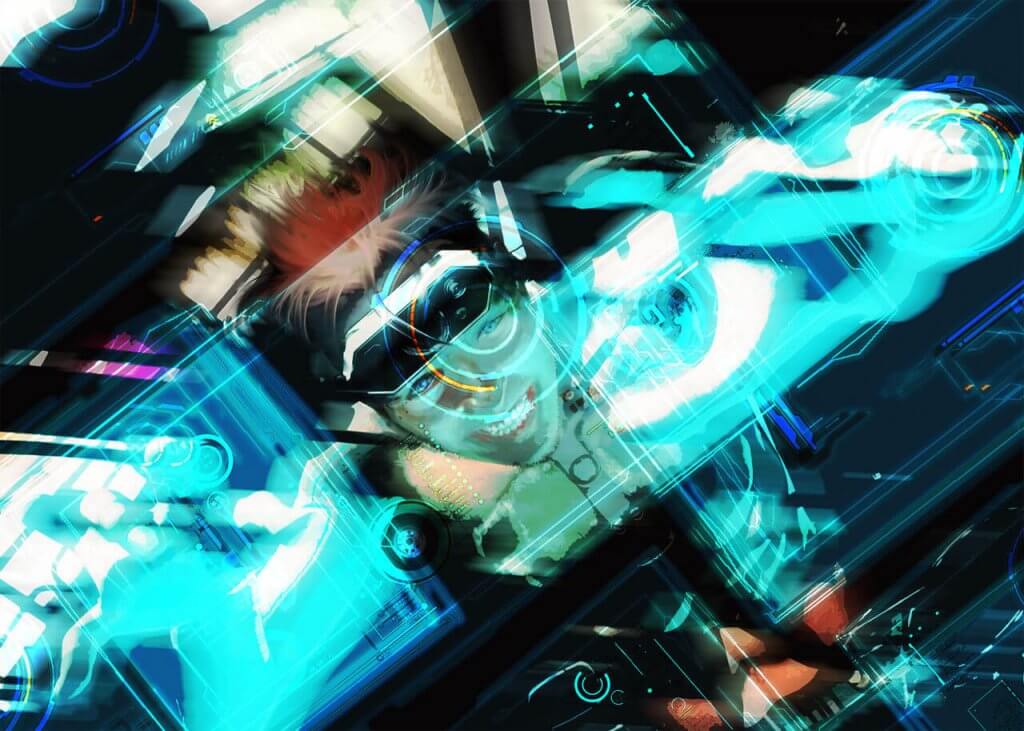 To get around this, the first thing that was done was to unify the game clock. A Combat Round and Player Turn is the same for everyone, regardless of where they are. The decker or technomancer can now hack away while the rest of the team does their best to keep the decker’s meat body from getting ventilated. Everyone stays involved.

This means that hacking can happen faster, which makes it feel less complicated. Some may worry about the lack of complexity, but one of the great things about the Sixth World is the sheer amount of hacking there is to do. There is always a camera, a commlink, a weapon, a drone, or something else to hack into and mess with.

The next thing we did was to unify the decking rules with the rest of the ruleset. Attribute + Skill are all you will need to get yourself going, just like any other situation. If combat can be that simple, why couldn’t the Matrix?

Shadowrun has always been just a step ahead of real life in terms of technology, but there have been times where the real world catches up. One of the biggest examples of this is the advent and spread of wireless technology and how ubiquitous it has become. The major Matrix changes in previous editions made strides in keeping up with technological milestones, but that world keeps changing, and the Matrix did not always reflect what was happening today, let alone the future.

While it would be easy to include all manner of real-world technologies and security measures, there’s no need to get so detailed. Rather, several real-world cybersecurity measures have been taken into account with the general rules. Relatively simple things like Difference Checkers, Configuration Backups, and Access Control Lists have been baked into the system as part of the Matrix actions and host architecture.

How did we make it easier? First off is the basic structure of the Matrix itself—you basically just have Hosts and PAN’s now. A PAN from a game mechanic point of view is just a mini mobile host. Instead of needing to worry about what is the master and what devices are slaved to it, all you need to know now is whether they share a network. Want to hack a device? Just identify what network it is on, gain access, then do your thing.

The second part is access levels. There are technically three access levels: outsider, user, and admin. Each of the Matrix actions have a minimum required access level to attempt. Outsider is the default level where everyone starts and does not require any action or rolls to have, so any actions requiring this level can skip to the “do your thing” step. User and admin access levels require some hacking to obtain, with admin having higher security protocols and therefore being harder to obtain. Naturally, if you get it, it grants you more options.

How did we address the modular flexibility? That’s where cyberjacks come in. We took the functions of a cyberdeck and split them up into two devices. Cyberjacks are the new wave technology that replace datajacks for a decker—they are what now allows a decker to fully integrate with the Matrix via VR. They are headware cyberware that contain the Data Processing and Firewall matrix attributes. Cyberdecks now only contain the Attack and Sleaze attributes and carry programs. In general layman’s terms, a cyberjack give you the keys to the workshop but the cyberdeck is your toolbox. So you can mix and match the two as desired to fit what you want or need it to do. Part of this modular approach is also the fact that we lowered the overall nuyen investment required to be a decker. Since the cyberjack is a neural implant, it comes with a hefty Essence cost that allowed us to significantly lower the nuyen cost. Plus, since you don’t have to go all in on a single device, you can pick and choose how much you invest at character generation and still be very effective but have a much lower threshold for advancement into better gear. The overall impact also means that while it is cheaper to be a decker now, it is also harder to be good at without investing a sizable chunk of Essence. You can still be a decker without a cyberjack—you’re just not going to be as good.

Technomancers. We didn’t make many changes to technomancers other than what was needed to fit the new game mechanics in general; they essentially still function as they always have. They still use complex forms and summon sprites to assist them in the Matrix, but we did rewrite some things to hopefully be more intuitive and easier to use. Technomancers still have all of the functionality of a decker plus the utilities of their special powers, but now have the option of adding their Resonance score to their Matrix attributes to allow them to adjust their persona as needed to the situation.

Those are the basics of the changes. We’re excited for you to have the game in your hands and see what you can make happen!