Do you have the Shadowrun, Sixth World Beginner Box Set? Do you want a preview at how characters in that ruleset will look? Do you just want free Shadowrun stuff? There’s no wrong reason to download the character dossier for Emu, the human rigger! It’s now available!

And it’s a great time to get Beginner Box material out, because the box itself is nearing release. The official street date is July 10–two weeks from now—but you might want to pay attention to your friendly local game store, because some copies might show up in advance of that. So if you want your first look at the next ruleset for one of gaming’s greatest settings, keep your eyes open!

Of course, the Beginner Box is the first step of the journey to the release of the full Shadowrun, Sixth World core rulebook, which will go on sale on August 1 at Gen Con. We’ll be counting down until that week with more blog posts and information about that book, including the following:

July 24: How to describe 30 years of Shadowrun history

We look forward to sharing more about this edition of Shadowrun, and we’re especially excited to get people playing! 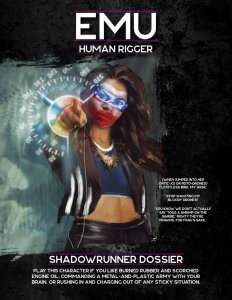