While last week’s post focused on the rules of Shadowrun, Sixth World, today I want to talk about the game’s Sixth World setting, which is a key element of its success. It’s not just the unholy hybrid of fantasy and cyberpunk that make it compelling, but also the way the ongoing storyline has evolved over the years. With dragons, spirits, and sasquatches wielding significant corporate power, AIs and other mysterious entities roaming the Matrix, and spell-casting gangs spreading chaos through the world’s cities, the Sixth World is vibrant and exciting—and always throwing challenges at shadowrunners. 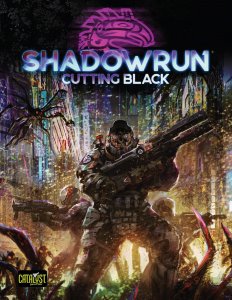 Talk to any Shadowrun fan and they’ll tell you stories—maybe about the Universal Brotherhood, or Renraku Arcology, or the death of Dunkelzahn, or Crash 2.0, or the fight for the future of Chicago. The unfolding story over the past thirty years has kept players and readers entertained, as stories play out in both sourcebooks and fiction.

That tradition continues with Shadowrun, Sixth World. Last week I talked about the upcoming plot sourcebook Cutting Black and the campaign book 30 Nights. While I don’t want to spoil any of the upcoming plot details, let me say that they start with Ares making a big move against the bugs, and the various responses to that destruction will reshape the world. The events are big, multi-pronged, and provide lots of chances for shadowrunner involvement. These aren’t events that happen over shadowrunners’ heads—they’ll be right down in it, dealing with world-shaking events and trying to survive while figuring out just what happened. 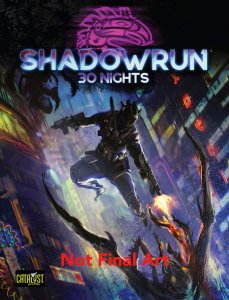 While these events are important, they don’t cover all the stories of the Shadowrun universe that need to be told. Novels, novellas, and short stories play vital roles in immersing readers in the universe and sharing unforgettable stories. From classics by Nigel Findley, Tom Dowd, and Robert Charrette, to new favorites like Russell Zimmerman, Jennifer Brozek, and R.L. King, Shadowrun has been Home to great stories and storytellers. Which means I’m very excited to talk about the fiction that’s coming up!

We already mentioned the six-part series of novellas called The Frame Job. They’ll cover the four characters included in the beginner box set, as well as a bonus character, then have a Sixth novella wrapping the whole story up. Dylan Birtolo wrote the first one, Brooke Chang wrote the second, and talented writers such as Bryan Steele, CZ Wright, and Jason Schmetzer will take on the other characters. Then I’ll be delighted to wrap it up! 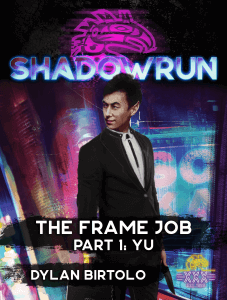 But that’s not all the Shadowrun fiction that will be coming your way! Jennifer Brozek has a new novel called Makeda Red coming your way. It starts with an extraction on a luxury Party Train, and it’s every bit as fun as that concept implies. And more is in the pipeline, so keep your eyes peeled for future announcements!

Word about Shadowrun, Sixth World info, it’s starting to spread! EN World has a review up of the Beginner Box, Diehard Game Fan put up an unboxing, the Shadowcasters Network continues to cover the rules and upcoming books, Meeple Monthly and GTM have articles about the game (the latter includes a new, double-sided poster), and more reviews will be coming up—we’ll link to them when we see them!