Wait, Shadowrun, Sixth World isn’t out yet? But I’ve been thinking about it for years! Playing it for more than a year! How are other people not playing it? Development time can be so disorienting.

There was a time—six years ago, to be specific—when I threatened physical violence to anyone who said the words “sixth edition” in my presence. (The threats didn’t work. No one is ever scared of me. But I digress). Fifth Edition took a lot of effort to produce, and I didn’t want to think about starting that whole process again. But then there were a few years where I didn’t have to think about a new edition, and I could recharge. Actually, that’s not entirely true, because every time I play a game—whether it’s one I worked on or not—I’m kind of thinking of a new edition. I’m looking at what works well, what works differently than intended, and what possibilities might open up with a tweak here and there. So when the time came to envision the next edition of Shadowrun, I had a few ideas, as did the excellent roster of Shadowrun writers and gamemasters I could tap into. 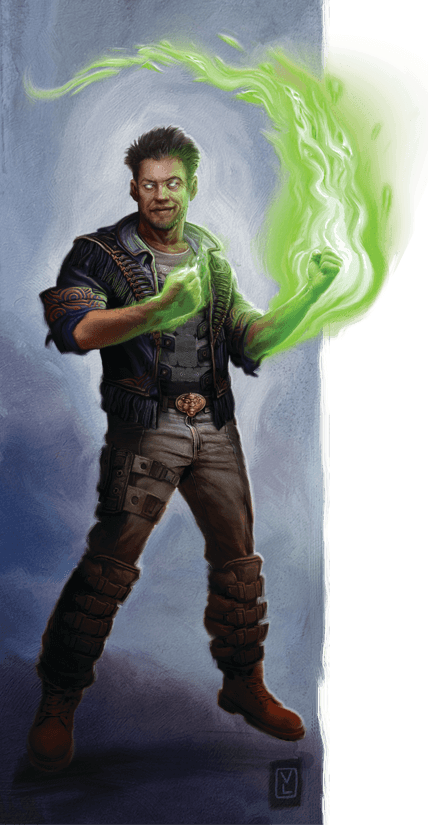 All those ideas needed a framework, of course. As we started our work, we decided the sixth edition of Shadowrun needed to possess three main qualities:

Those last two points are related, because it’s tough for a game to feel like Shadowrun if you’re not rolling a healthy handful of D6s. But there’s more to it than that. Combat specialists, spellcasters, conjurers, adepts, faces, deckers, technomancers, riggers, enchanters, weapon specialists, and more all need to exist, and they all must have different and meaningful ways to contribute to a run.

In this edition, all that had to happen within 300 pages. Which is a trick. Fifth Edition, not counting the index, is 466 pages; the anniversary edition of Fourth Edition was 351 pages, and Third Edition was 325 pages (minus the sample record sheets). Second Edition is a lean 284 pages, but it had no bioware, no technomancers, no alchemy, and no qualities, to name a few things that have changed in the intervening years. The book that started it all is an even leaner 207 pages, but along with the elements Second Edition didn’t have, it lacks things such as adepts and foci, and it offers only twenty guns—heresy! (Fifth Edition has 52, while Shadowrun, Sixth World will offer 53–we didn’t cut back much on those options!) All this is to say that streamlining the core rulebook back to 300 pages was not going to be easy.

It’s important to note that simply making the book shorter doesn’t, by itself, do any good. You can make any book shorter by simply ripping every third page out, but you end up with a book that makes no sense. Making the book shorter only is useful if the game also becomes smoother to play. In other words, we didn’t just want a shorter game—we wanted one that moved faster and was easier to get into, while still offering lots of meaningful options. We also didn’t want this to be Shadowrun: Anarchy for the simple reason that Anarchy already exists. Anarchy represents a more extreme end of the rules-light spectrum than Shadowrun, Sixth World–one way to understand the difference between the two is that the gear rules and listings take up about seven or eight pages in Anarchy, compared to fifty pages in Sixth World. Did I mention we wanted to offer lots of options?

Anyway, this means that if the rules were changed, they needed to be changed with an eye toward enabling players to do the things that they wanted to do more quickly. Combat should be faster. Hacking should be smoother and more intuitive. Magic should adapt to be just what the caster wants it to be. And so on. So what, specifically, did we do? Here’s a sample:

Those are some of the major changes, but far from the only ones. We haven’t talked about Attack Ratings, the uses of armor, changes to Knowledge skills, revamped spell design, new vehicle stats, cyberjacks, and more. I hope this gives you a taste of the upcoming changes, and I look forward to you all playing Shadowrun, Sixth World as much as I have and will! And look for more information on this blog each Wednesday in May!