Is Sixth World an attempt to simply fix the problems that some saw in Fifth Edition, or is it more of a ground-up re-envisioning of the Shadowrun game as a whole?

Definitely closer to the latter. I wouldn’t say it’s a total re-envisioning—we still have dice pools of D6s, we have the same attributes, and many aspects are the same as previous editions. But we did not want to simply tweak or adjust Fifth Edition–we wanted this to be a whole new edition, with new concepts and a different feel. We also wanted to streamline the game—which is the subject of the next question! 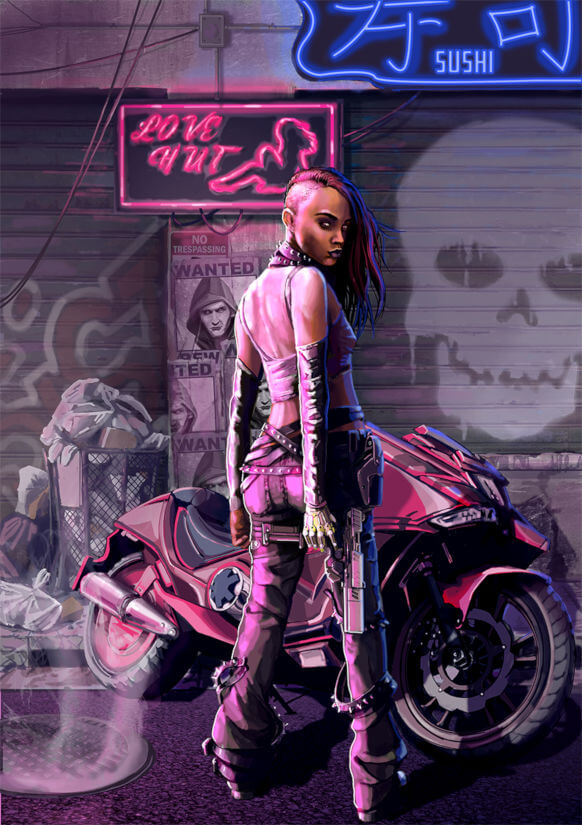 In streamlining the Sixth World rules, did the developers take any cues from other game systems and their recent editions on what to do or not do?

Short answer: Yes. Longer answer: I play games a lot, so I’m always looking at lessons to learn from other games. In particular, I looked at a lot of ways of making adjustment to dice and dice pools, to see how the math on each of those work out. Adjusting threshold numbers, adding more dice, adding +1 to a die, re-rolling a die—all of those have different effects, and knowing what those effects are was important in designing the game (I have a lovely spreadsheet with fun stats!).

I also looked at one element crucial to role-playing games, and that is giving a range of characters meaningful choices. Without going into details, I’ve seen games that do a great job of it, and I’ve seen games where some types of characters seem to only be able to choose from a small range of actions, so they end up picking between one or two alternatives most of the time. We tried to emulate the former!

Who did the developers turn to for input on revising the rules for Sixth World? How was the system playtested and what tweaks were made as a result?

Lots of people! The initial phase of development was more of a reaching-out phase—we spoke with people who weren’t in the trenches of day-to-day Shadowrun work to get their thoughts on different ways Shadowrun could reinvent itself, so that we could get fresh ideas. We also reached out to freelancers working on Shadowrun, especially those with lots of in-the-trenches gaming experience.

Playtesting went through several phases (fun fact: the core playtest document was updated and re-circulated 12 different times during the playtest process). Throughout the process, I ran games with a variety of people—Catalyst staff, experienced Shadowrun players, and people new to Shadowrun. The freelancers working on Shadowrun ran several playtests as we were in the early stages of forming the main structure of the game.

Once we had a basic structure in place, the playtest broadened. We have a large group of non-staff, non-freelancer playtesters we use for a lot of different games, and many of them stepped in to run games. This gave us the perspective of people coming to the ruleset with fresh eyes, having not been involved in any of the early development of this game or in any writing of SR5 rules.

The changes from this process are numerous. A few examples:

How long will it take for the various sourcebooks for all the character classes to come out? Will I have to “downgrade” my character to what’s available in the core rules until those books are available?

The combat sourcebook will come out by the end of this year. As with Fifth Edition, the other core books will then come out regularly as they are developed and written. We will have a character conversion guide that will help with bringing a character into the new edition, but we simply cannot put put rules that covered more than 2,000 pages in Fifth Edition in a single burst, especially since the last books developed for Fifth Edition haven’t come out yet, so I was working on them while also working on Sixth World. Getting all the core books out in a single year would require at least a year where I wasn’t working on anything else, and that’s not something I can do!

When will Missions change over to using Sixth World rules, and will my character have to be reset to use only what’s in the core book?

If all works the way we have planned, the first Neo-Tokyo Missions will be dual-statted for both Fifth Edition and Sixth World. We hope those will start flowing out this fall. That means you should have at least half a year before having to make the conversion to Sixth World to play Missions. If the dual-statting goes smoothly, we can explore extending it.

Have you made any changes to riggers, their rules, or how they’re incorporated in runs? Will rules for riggers come earlier in the release schedule than in the past?

Yes. Vehicle stats are greatly changed—in some ways, they’re one of the ways the rules became a bit more complicated, if only so vehicle movement could be tracked without the abstracted chase rules of previous editions. Matrix rules have been changed, so with them rigging rules have been adjusted, though that level of detail is beyond the scope of this post! Between drone rigging, vehicle operation, and taking over other vehicles and drones, riggers should find plenty to do.

The timing for the rigger book and other books has not been decided yet, though I’ll just take this opportunity to point out that Rigger 5.0 came out more than three years ago, less than halfway through the Fifth Edition cycle!

What would you say to those who are concerned about the reduced number of Skills in Sixth World?

First, the goal of specializations and expertise is to give players a way to differentiate characters with this smaller skill set. I hope that will be useful and give characters their own feel. Second, if, in the end, you prefer the longer skill list of previous editions to the list in Sixth World, that’s okay. I long ago came to grips with the fact that no single edition of Shadowrun will be everything to everyone. Everyone will like the things they like, and I just hope Sixth World provides rules and tools a substantial group of players can use to have fun!

Can you talk a little more about Edge, and why Sixth Edition changes how it is used?

The process of how Edge evolved is the longest, most detailed process in the whole game. So I’ll try to make a long story short! Ish. So, the first thing I focused on when it came time to move past brainstorming and put rules to paper was combat. I wanted the whole combat process to move smoother and for combat to resolve faster. I saw a lot of things to tweak the process, but in the end, many of them boiled down to one thing: It takes a long time to calculate dice pools. Modifiers can come from a lot of places, and remembering to look at all these places, while also remembering the size of the modifiers, can be complex. I wanted to streamline that whole process. The first step in that was combining a lot of weapon stats into a single number called Attack Rating. That number is compared to a Target’s Defense Rating, and, in the initial system, if your Attack Rating was sufficiently higher than the Defense Rating, you’d get what was called a Chip, which would represent your accumulated advantage in the fight. The idea was that other things, such as good tactical execution, would give you more Chips. Then playtesting showed us that the Chip system had similarities with Edge, and things would work best if Edge was expanded, rather than introducing a new meta-game currency. Once that merger was in place, the work was to find how to implement Edge across the system. So deckers, faces, riggers, technomancers, and whoever else hits the shadows gets a chance to build up Edge and spend it in a spectacular move.

How did you balance the need to streamline the core rules against the complexity and detail that many Shadowrun players enjoy?

That was a tough one! In the end, I think it’s about making a good framework for the game. The basics of Shadowrun are simple—find a skill for the action you’re going to attempt, add ranks in that skill to ranks in an associated attribute, roll that many D6s, and count how many 5s ad 6s you get. You’re either trying to beat a threshold established by the gamemaster or the number of hits from another character. That part isn’t hard to master. The complications come with all the attachments, which means that in the end, it’s about not overloading the core system with attachments. The way Edge works in Sixth World gives players plenty of opportunities for their choices to have and effect in the game while making it easier to determine what that effect is.

Why should an established Shadowrun player pick up Sixth World?

For the adventure and challenge! Game rules offer structure and limits, with the players seeing what cool things they can pull off within that structure. Just like designing a new character, new rules give you a chance to see what you can make happen with new trappings. In Sixth World, combat should move faster, and your opportunities to do spectacular things should come about more frequently. You also might have an easier time getting people who found the longer Fifth Edition book too daunting into the game!